I saw my husband looking to some internet site for second-hand car. I asked him, if he is planning to buy second-hand car instead of new ones. He said, it isn’t bad,specially for a beginner driver. Out of nowhere, I said NO! I said,he can’t buy second-hand, because I don’t want to. He said, why I don’t want? What was the problem with that? I wanted to deny something, but if I don’t express my  opinion; I know he’ll go for it, and my feelings will remain hidden, and will not be considered at all.So since my husband kept asking me, I decided to explain to him, why I don’t want second-hand stuffs. 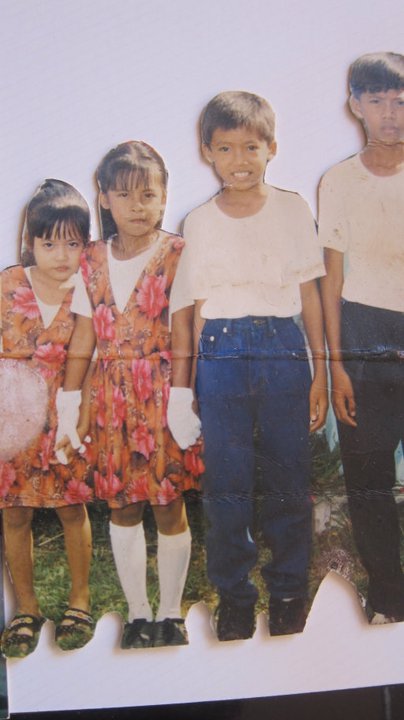 From the left; me (Anicka), my sister (Melissa), brother (Henry), eldest brother (Hubert)

(The photo above was very old,I remember it was foundation day of the elementary school; where my brothers and sister spent their 6 years in Elementary. I was wearing same clothes like my sister, because my mother thought I would be envy to her dress. But that was actually dancing costume of  her, so did my brothers. (Giggling) I do look funny.)

“when I was a child, I don’t actually have many new stuff (except underpants.. all are always new 🙂 ). I am the youngest among siblings, and I have one sister older than me. Every clothes, toys, etc. which were smaller for her, goes to me. When my girls, cousins grew up; everything were given to me. Even the bag I was using going to school are also hand-made or else second-hand stuff from cousins. I can only have new stuff during Christmas, or before Christmas. That doesn’t mean we don’t have money to spend for clothes, etc. My parent, only priorities everything, and thinks about important stuff; since I can also use stuff that has been used already. I wasn’t picky during that time. Education is valuable, and money needs to spent wisely, and that includes tuition fees and allowance for the four of us. I don’t get anything I want before. I only get enough, no more, but also no less. Using clothes that has been used by my sister isn’t a big deal for me before. I was young, and I just don’t care. If there were hand-made clothes for me and my sister. It must be same so no one actually get insecure or jealous from each other; but we also grow older, since then (high school) my sister and I never had a similar clothes, no more! We think more mature, and we actually are not twins;but that doesn’t mean that I don’t use second-hand clothes by that time. I still did!

Every time I walked on the stage with my mother, to received an award every end of the school year; I do have nice dress on me. Dresses are nice, but they actually are used already from cousins who lives far away from us. (Doesn’t matter, they don’t see it anyway) I am a very proud students, and daughter. I don’t ask for anything, or for new clothes every time I received award.( I guess some kid who actually received award, deserves some gifts, or maybe some new stuff,but I don’t.) Time, passed by. I went to high school and still received awards. (those days, the awards are the most important for me, because my parent would be proud of me)

I went to Manila (Philippines) and spent years in college. That time, I learned something, it can consider bad,or anything. I keep my allowance, don’t eat much, and I started to save money to buy what exactly I wanted (but I never do kick-back when it comes to money) Mingling with other people who thinks exactly different from I am; these people who cares how they look, than how much they learned in school. Yeah, I know plenty of these people in school, but I still managed to act differently. I studied and at the same time, I spent money to exactly bought what I want. I bought shoes, bags, clothes; doesn’t matter if there is or there isn’t a brand. All I wanted it something new for myself. Everyone in the school thought, I was rich; but they don’t know that I saved the money, in order to have these stuffs. From that day, I told myself, I will never buy anything second-hand, or already used by someone else. It’s nothing wrong about buying second-hand, but for me;”I have a different story”. I am sick of having second-hand/used stuffs.

I think, my childhood has been an experienced to me, and I think that its enough. Now, I want something different. I want something special, and I can consider I am the first one to have it, I don’t want second-hand. (as much as possible) That is also a reason why, whenever I give something to my parent as gift, or to my brothers and sister. I make sure, it’s new. Something which they can call, “not used”. We are not a family of poor. Our family just learned, that spending money for some properties like; lots, farm, and anything that will have huge value is greater than to spend money to clothes or anything that wouldn’t last any longer. I still think the same way, but at the same time, I’ll make sure I can buy whatever I want, and enjoy stuff as much as I want, as long as I am not hurting anyone else, or stepping to some people’s dignity. I also save money, so I don’t think it’s a problem.”

That is what I said. After hearing me out. My husband completely understood, what exactly I want. He respected that, and I am happy that I finally shared it to him. Now? He understood me better than before.

Don’t get me wrong having this kind of maybe weird or stupid idea; it’s not really bad buying used stuff, but people are just different, and I do have this feelings because I experienced enough.